Prices are current competitive pricing however open to negotiating.

We will keep you posted.

All grade A product guaranteed

Chanterelle is the common name of fungi in the genus Cantharellus. They are among the most popularly eaten species of wild mushrooms. They are orange, yellow or white, meaty and funnel-shaped. On the lower surface, underneath the smooth cap, most species have gill-like ridges that run almost all the way down its stipe, which tapers down seamlessly from the cap. Many species emit a fruity aroma, reminiscent of apricots, and often have a mildly peppery taste (hence its German name, Pfifferling).

A basket of freshly cut chanterelles

Chanterelles are common in Europe, North America, including Mexico, Central America, Asia, including Turkey and the Himalayas (including Kashmir, Nepal, and Bhutan), and Africa including Zambia, Congo and Uganda. Chanterelles tend to grow in clusters in mossy coniferous forests, but are also often found in mountainous birch forests and among grasses and low-growing herbs. In central Europe, including Ukraine, the golden chanterelle is often found in beech forests among similar species and forms. In the UK, they may be found from July through December.

At one time, all yellow or golden chanterelles in western North America had been classified as C. cibarius. Using DNA analysis, they have since been shown to be a group of related species. In 1997, the Pacific golden chanterelle (C. formosus) and C. cibarius var. roseocanus were identified, followed by C. cascadensis in 2003 and C. californicus in 2008. C. cibarius var. roseocanus occurs in the Pacific Northwest in Sitka spruce forests, as well as Eastern Canada in association with Pinus banksiana.

Chanterelles are relatively high in vitamin C (0.4 mg/g fresh weight), very high in potassium (about 0.5%, fresh weight), and are among the richest sources of vitamin D known, with ergocalciferol (vitamin D2) as high as 212 IU/100 grams fresh weight.[10] Scientific research has suggested that the golden chanterelle may have potent insecticidal properties that are harmless to humans and yet protect the mushroom body against insects and other potentially harmful organisms. 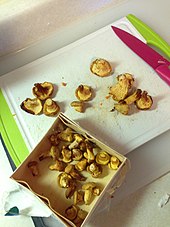 Though records of chanterelles being eaten date back to the 16th century, they first gained widespread recognition as a culinary delicacy with the spreading influence of French cuisine in the 18th century, when they began appearing in palace kitchens. For many years, they remained notable for being served at the tables of nobility. Nowadays, the usage of chanterelles in the kitchen is common throughout Europe and North America. In 1836, the Swedish mycologist Elias Fries considered the chanterelle “as one of the most important and best edible mushrooms.”

Chanterelles as a group are generally described as being rich in flavor, with a distinctive taste and aroma difficult to characterize. Some species have a fruity odor, others a more woody, earthy fragrance, and still others can even be considered spicy. The golden chanterelle is perhaps the most sought-after and flavorful chanterelle, and many chefs consider it on the same short list of gourmet fungi as truffles and morels. It therefore tends to command a high price in both restaurants and specialty stores.

There are many ways to cook chanterelles. Most of the flavorful compounds in chanterelles are fat-soluble, making them good mushrooms to sauté in butter, oil or cream. They also contain smaller amounts of water- and alcohol-soluble flavorings, which lend the mushrooms well to recipes involving wine or other cooking alcohols. Many popular methods of cooking chanterelles include them in sautés, soufflés, cream sauces, and soups. They are not typically eaten raw, as their rich and complex flavor is best released when cooked.

In the Himalayan Kingdom of Bhutan, it is known as Sisi Shamu and is generally picked from the forests. During the season, it is cooked with cheese and chillies or cooked with meat. 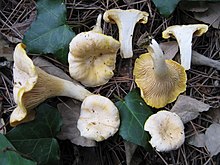 Cantharellus pallens has sometimes been defined as a species in its own right, but it is normally considered to be just a variety (C. cibarius var. pallens). Unlike “true” C. cibarius it yellows and then reddens when touched and has a weaker smell. Eyssartier and Roux classify it as a separate species but say that 90% of the chanterelles sold in French markets are this, not C. cibarius.

Similarly Cantharellus alborufescens, which is very pale, reddens easily, and is found in mediterranean areas, is sometimes distinguished as a separate variety or a separate species.

There are no reviews yet.

Be the first to review “Fresh Chanterelle Mushrooms” Cancel reply